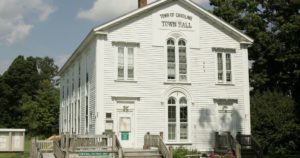 The Town of Caroline building which houses its courtroom and history museum was the subject of a  recent Taitem research project investigating potential water savings from the conversion of steam heating systems to air source heat pumps.

We have always known that steam heating systems lose water through leaks, air vents, and condensate tanks.  And so they consume water.  If we convert these heating systems to heat pumps, we will expect to not only save energy and reduce carbon emissions, but also reduce water use.  But how much water will be saved?

Another research project Taitem conducted in 2010, Steam Boiler Replacements (PDF), indirectly estimated water use as possibly being high.  However, in that 2010 research project, we did not directly measure water losses.  Instead, we estimated it based on total building water use.

The upcoming heating conversion (to heat pumps) of the old Caroline Town Hall presented a great opportunity to measure water use and so measure potential water savings.  We installed a water meter on the water pipe that goes right to the boiler in the fall of 2017.  In this way, we would be able to see exactly how much water is being consumed by the heating system, independent of other water uses in the building.  Mark Witmer, the Caroline Town supervisor, diligently read the water meter and gas meter over the last two winters, and the results are in. 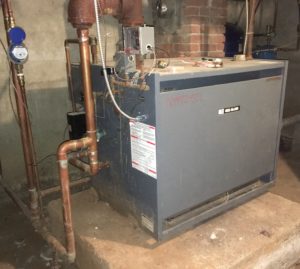 Usage is clearly higher in winter.  This means that the water is being lost when the boiler is firing, as we would expect.   1.5 gallons of water was consumed per cubic foot of natural gas burned.

Imagine over 4000 gallons of water being evaporated, per year, just to heat a small building. Caroline’s town hall building is just under 4000 square feet, so the water being wasted is approximately one gallon of water per square foot per year.

The water cost savings in a typical building would not be financially significant, just a few dollars per year, because water rates are so low at present.  And at Caroline, the water comes from a well, so the savings will be even lower; just the electric cost savings for pump power.  And as a fraction of our total water use, the savings are also not high.  A typical person uses over 30,000 gallons of water per year, at home.

But still, the potential water savings are measurable and are another good reason to be planning to wean ourselves off fossil fuels.

Do you have a steam heating system?  We can tell a steam boiler from a hot water boiler in a few ways: by the pressure, type of radiator, and more.  Take a few photos of your boiler, the boiler nameplate, gauges on the boiler, and a couple of radiators, and send them to Ian at imshapiro@taitem.com.  He’ll be happy to tell you which you have.

Acknowledgment:  Thanks to Caroline Town Supervisor Mark Witmer for his interest, enthusiasm, and contributions to the project.