Taitem Engineering joins 13 other Ithaca agencies, organizations and businesses to launch the Ithaca 2030 District, signing on to an ambitious challenge to reduce energy use, water use and transportation carbon emissions 50% by 2030. Led by the Tompkins County Climate Protection Initiative (TCCPI), this public-private collaboration works to create a groundbreaking high-performance building district in downtown Ithaca. Members pledge to make improvements to buildings and behavior to save resources and lower greenhouse gas emissions. They also aim for all new construction within the District to be carbon neutral by 2030.

As a Founding Adopter, Taitem supports the 2030 District with its technical expertise to rethink how commercial spaces are constructed and designed. Members benefit from the firm’s capabilities in energy modeling, green building consulting, design engineering, outreach, and education. Taitem founder Ian Shapiro owns two buildings within the District, and President Lou Vogel is on the Ithaca 2030 District Advisory Board. Taitem’s role aligns with the meaning of its name, Technology As If The Earth Mattered, and with its status as a B Corporation committed to supporting the triple bottom line of people, planet, and profit.

Ithaca takes its place with 14 other cities in the U.S. and Canada participating in the 2030 Challenge. Since 2006, 296 million square feet of commercial building space has been committed in the cities of Albuquerque, Austin, Cleveland, Dallas, Denver, Grand Rapids, Los Angeles, Pittsburgh, Portland ME, San Antonio, San Francisco, Seattle, Stamford and Toronto. The North American network shares data, supports peer exchange, and uses the aggregate purchasing power of District membership to secure reduced costs. The Ithaca 2030 District is helping to create national partnerships and influence national policy on transportation infrastructure and building science.

The national 2030 initiative was contributed to and coordinated by key industry players including the U.S. Environmental Protection Agency, American Institute of Architects, Leadership in Energy and Environmental Design (LEED), and the US Green Building Council, among others. For more information, member list, or to help expand the Ithaca district by becoming a member, check out the Ithaca 2030 website. 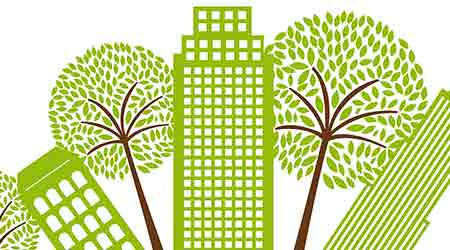 Load-reduction improvements in buildings will permanently reduce energy use. They are a gift to the building and to facility managers for future decades.

Below is a link to Ian Shapiro’s article at facilities.net that explores load-reduction improvements that reduce the installed cost of energy improvements AND permanently reduce energy use in buildings. Take note and consider the gift of energy efficiency for your building in 2017.